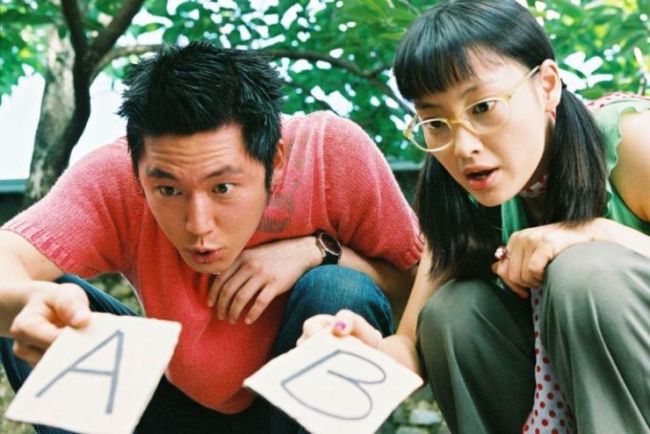 So, I’ve been watching Chuno, and it’s intense to say the least, so I needed to temporarily switch gears into something light-hearted and short. Since I’m enjoying my Jang Hyuk obsession right now, I thought I should check out this 2003 Romantic Comedy “Please Teach Me English”.

Now, I didn’t have high expectations when I made the decision to watch this movie. I read some reviews on it and I actually held off watching it because it didn’t seem like it was all that popular or great.

I try to be objective with reviews, but I must admit, I’m quite bias. If I like an actor, or director, I tend to turn a blind eye at some obvious flaws. Anyways, I’ll try to make the review fair, but everyone will have different opinions in the end.

Quick Sypnopsis: Na Young-ju and Mun-su are both taking the same English class to learn to speak English. Na Young-ju ends up liking Mun-su, who seems more interested in their blonde-haired English teacher than her.

So, I actually thought this movie was pretty cute. Yes, it’s exaggerated, but I thought it was pretty funny. It has that over the top, somewhat embarrassing sense of humor. Na Young-ju (the female lead played by Lee Na-young) does some pretty weird things where I cringed and sorta sank down into my seat thinking “Oh my gosh… what is she doing now!? Stop embarrassing yourself girl!”. I really liked this character. She was in fact my favorite character in this movie. She was awkward, embarrassing (yes I know… I’ve used this word three times already) and a crazy stalker, but very entertaining. Now, the only other thing I’ve seen this actress in, was the Kdrama “Ireland”. Ireland was the worst Kdrama I have ever seen. I couldn’t finish it. It was really weird and poorly done in my opinion. So, I wasn’t crazy about this actress, but I thought she was pretty good in this movie.

I think I liked her because I’ve sometimes felt like her (in a less exaggerated sense). Have you ever felt like you blend in a crowd, like there’s nothing that really sets you apart? Or have you ever liked someone, only to see him ogle over someone else? Have you ever felt plain and boring? Well, this is how she feels – and yet she is anything but normal! She’s pretty eccentric if you ask me, but that’s what makes her unique and I think one of the reasons that the male lead changes his opinion of her.

Now, about Jang Hyuk’s character, Mun-su. Hahaha! Mun-su’s a playaaa! Well, Hmm! Sort of a player. Let’s call him an unsuccessful player. He’s all talk, but in the first half of the movie he’s chasing after skirts, mostly that of their English teacher. It’s pretty cool to me to watch him in a comedic sort of role. He does it pretty well, although I generally prefer to see him in more serious roles. To me, his acting was convincing, I found his change of heart believable, however, I thought it could have been transitioned better in the script. One moment, he was trying to avoid the main girl, and next thing, he’s looking at her and getting jealous that she’s getting drunk with some other guy. It reminded me of Baek Seung-jo in Playful Kiss, when he realizes his feelings for Oh-Han-ni. It’s like both male leads were taking for granted that some girl liked them, but the moment she wasn’t there, they were both like “Where did you go!?”

Additional things I liked about this movie:

1) I liked it when they were learning English. It was really cute how they would speak English.

2) I really liked the little cartoon drawings of the main character as well.

3) I thought it was funny how she kept losing her shoes and he was a shoe salesman. I’m not sure why I liked this, but I thought it was comical. I mean, who keeps losing their shoes – Really? Maybe they were too big.

Anyway, if you’ve been watching a lot of intense dramas lately, or sad movies where someone dies, why not have a change of pace and check out this movie? It may not be the best movie you’ve ever seen, but you may just find it enjoyable! I did.

I've always loved film and acting in general. Whether it's on stage, in a movie or in a drama. I really like international film but do mostly watch Asian dramas. Dissecting shows and movies is one of my favorite pastimes. View all posts by zhaoul